Taxpayers Will Say Hell No on Proposed Charter Amendment

“Two years ago, Democrats, led by Mayor Joyce Craig, blocked Alderman Tim Baines’ motion to ask voters whether or not Manchester should continue with its Tax Cap.  As I reported at the time, Gene Martin, then chair of the Manchester Democrats, was strong-arming Democrat aldermen to oppose the question because it would ‘draw the wrong people to the polls and hurt Joyce’s reelection chances.’

At this past Tuesday’s meeting of the Board of Mayor and Aldermen, Mayor Craig urged the aldermen to ask voters to amend the charter so that the school board could determine its own spending and raise its own taxes.  Apparently, they think this will draw the ‘right people’ to the polls and help Joyce’s election chances.

I think they’re wrong and welcome this question on the ballot, the hypocrisy of how it got there notwithstanding.

Mayor Craig supports this because it’s easier for her, the teachers union, the bureaucrats and others to blame ‘lack of funding’ for our miserably failing schools.  The way it works now, those who want to spend more money on schools have to compete money that could also be spent on more police, new fire trucks or better roads.  The aldermen have to balance competing demands and priorities to protect the taxpayers from being bludgeoned. Take the schools out of that picture and that balancing act disappears.  The aldermen’s lives become much easier.

To those who say school spending and taxes will still be limited by the tax cap:  Why support the change if it won’t make any difference to their bottom line?  I think we all know the answer, especially the taxpayers!

As the graphics below demonstrate, (click on each for larger view) school spending has soared while enrollment has tumbled and test scores have cratered.  Add to this Mayor Craig’s support for string of bureaucrats that have been hired and the proposal to spend half a billion dollars on school buildings and I think the taxpayers will not only come out in droves to say ‘no,’ they’ll say ‘Hell NO!’ 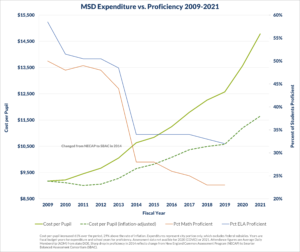 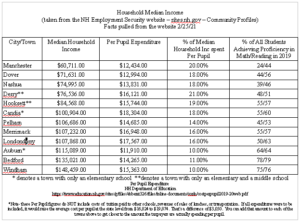 I think parents concerned about school performance will, too.  They know more money isn’t the answer.  They know fundamental changes need to be made to fix the schools that are failing our kids.  They want choice, input and respect.  They want to participate and know their input is valued.  They’ll get that from my plan to fix our failing schools.

“For years, unions, bureaucrats and board members have all complained that all they need is more money to make things better.  Believing they won’t blow the tax cap is like believing a 16 year old won’t blow the speed limit while driving a sports car.  The taxpayers of this city know that and I’m convinced they’ll turn out to vote it down and elect me mayor because I have proven both during my time on the school board and as candidate for mayor that our schools can be fixed without soaking the taxpayers again and leaving them nothing to show for it.”