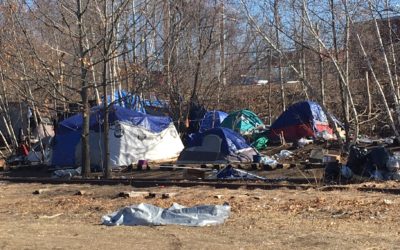 Getting a Handle on Homeless Vagrancy

The goal of this proposal is to adequately and compassionately assist homeless people who come from the city of Manchester without attracting the hordes of homeless from around NH and other states, which is currently happening and has led to what we see in our streets, parks and neighborhoods. The city will continue to attract the homeless so long as it focuses on accommodating them and turning a blind eye toward their behavior.

According to published media reports, more than 430 homeless are living on the streets, in the parks and on other public land and unattended private property. The city estimates there are more than 30 “camps” all over the city. In as much as city officials admit that 75% of the homeless in the city come from somewhere else, the primary focus in confronting Manchester’s out of control homeless problem should be on making the city a less attractive place for homeless people to come.

With the vast majority of the homeless being those who abuse drugs and or suffer with mental illness, it is important to note that Rich does not believe that housing is a primary driver of homelessness. Experts believe that between 80% and 90% of the homeless have substance abuse and or mental health problems. That means that no matter how affordable, more housing will not prevent substance abusers and those suffering with mental illness from being on our streets.

To stem the tide of the homeless flooding into our city, as mayor, Rich would:

Outreach teams, comprised of paramedics from the Fire Department and social workers, routinely visit homeless camps to offer assistance and shelter. Despite their efforts, the vast majority of homeless decline any help that is not brought directly to them in their camp.

To encourage people to use the services and facilities that exist to help, as mayor, Rich would:

One of the vexing questions surrounding the homeless issue in Manchester is why the city hasn’t enforced the many ordinances that simply do not allow for the behaviors that are harming our businesses, neighborhoods, streets, parks, trails and other lands. There are literally pages of ordinances, not including state statutes regarding things like trespassing, that could be used to address these problems. By failing to enforce them, Manchester is condoning their violation and encouraging behavior that is destructive to our quality of life. It is also creating hazards for the general public as well as those in the camps. Because the city turned a blind eye to the illegal use of propane heaters in the camps, multiple propane tanks exploded (11 in all), causing fires, injury and even death!

Therefore, to discourage the homeless from remaining unsheltered and not accepting of services, as mayor, Rich will:

The battle between the city and the state over “who’s to blame” for Manchester’s homeless problem has to stop. Mayor Craig’s constant carping about alleged failures of the state to do its part is counter-productive blame shifting that deflects from the city’s own failings, which have been addressed here. However, that doesn’t mean that things can’t work better.

To improve cooperation with the state, Rich, as mayor, will:

Finally,the city should continue to work with the many wonderful local agencies that are serving the homeless. They are on the front lines and should be heard. Rich’s goal, as mayor, however, won’t be to expand their capacity to serve an ever-growing number of homeless people who aren’t from the city. It will be to help them serve, as responsively as possible, what he expects will be a dwindling number of homeless that will result from enacting this plan. Rich’s goals are to shut off the magnets drawing the homeless or people likely to become homeless to the city, stop enabling homeless camps and negative behaviors, and make clear that, while Manchester wants and stands ready to help those in need, it will no longer allow those who refuse help to ruin the quality of life for the other 115,000 people and thousands business that call Manchester home.

Click here for the news reports used to demonstrate the problems identified in this proposal.

Click here for the ordinances that are being ignored.

Watch this brief video and read this article to better understand why Rich feels so strongly that the city must change course! Thanks!